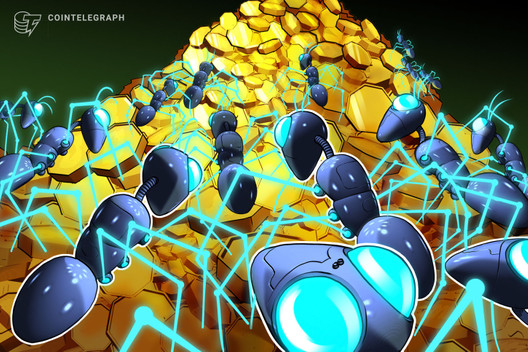 The London Stock Exchange-listed mining company Argo Blockchain has reported a 10x increase in revenue the past year, prepares for massive expansion.

Publicly-listed mining company Argo Blockchain had a tenfold increase in revenue for 2019 over the previous year, ProactiveInvestors reports on Jan. 20. Its shares bounced as the company plans further expansion in the upcoming year.

Argo Blockchain PLC is a company operating mining rigs for profit, as well as providing Mining-as-a-Service (MaaS) to institutional investors who are “looking to hold specific coins but do not want to procure via exchanges.”

Based in London and listed on the London Stock Exchange (LSE), its mining capacity is reportedly based in Quebec, leveraging the region’s cheap hydroelectric power.

The company produced 432 Bitcoin (BTC) during its operation, compared to 426 in Q3 2019. Nevertheless, its revenue fell from £3.63 million ($4.7 million) in Q3 to £2.66 million ($3.45 million) in Q4, citing a decline in cryptocurrency prices, “increased mining difficulty,” and unfavorable foreign exchange rates.

Mining margins, or the value of the currencies compared to the production cost, remained healthy at 52 percent in Q4 2019, despite a fall from 73 percent in Q3.

The firm is making a commitment to significantly expand its operation, having almost doubled its mining rigs since the start of 2020. Its goal is to reach 17,000 mining rigs by the end of Q1 2020.

Most of Argo Blockchain’s mining power is reported to be in Bitcoin mining rigs. As the Bitcoin halving is set to occur around May, the mining industry is feeling the pressure from a 50 percent drop in supply expansion rates. Bitmain, one of the leading producers of mining rigs, laid off 50 percent of its staff in anticipation of the event.

Though Argo claims to have “one of the highest efficiency rates in the market,” the halving is likely to be a period of great uncertainty.

The revenue shock might be compensated by an appropriate increase in Bitcoin price, as several experts claim the halving is not priced in by the market. However, others argue that it will not lead to increased BTC price at all.