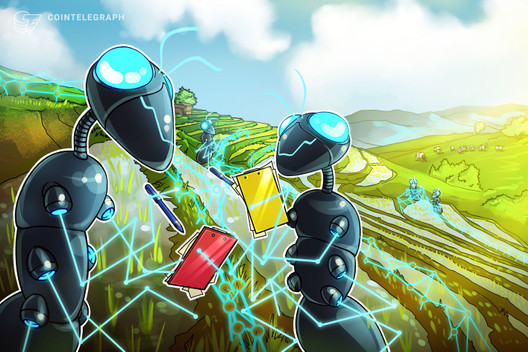 Australian livestock traceability platform, Aglive Group Limited, announced the completion of a pilot tracing beef exports from Australia to China on May 4.

Australian livestock tracking platform Aglive has completed a pilot that monitored shipments of beef to China.

Aglive’s trial was launched during late-January and was conducted in partnership with global shipping logistics company DB Schenker and industry body Meat and Livestock Australia.

The pilot saw cattle tracked from Macka’s cattle farm in regional New South Wales to an abattoir located in the same state.

From there, frozen beef products were tracked across the supply chain as the meat was transported by land freight interstate to Queensland, and then shipped to Shanghai — ensuring that the products were stored under safe conditions throughout transit. The products were then distributed to grocery stores in Shanghai.

Speaking to Cointelegraph, Aglive executive director Paul Ryan emphasized that each individual product, carton and air container used across the supply chain is identified and tracked, with Internet-of-Things devices included alongside the products to record temperature and location data.

All data is recorded to a private version of the Ethereum blockchain that can execute smart contracts on both Hyperledger Fabric and Ethereum.

The executive stresses that Aglive is “technology-neutral” and “will work with whatever blockchain technology delivers the best outcomes for our client."

Ryan stated that the idea for a traceability trial in partnership with Macka’s was conceived during late 2019, however, it saw delays due to COVID-19 and a slow uptake of the technologies employed.

“The adoption of new concepts and practices is never easy as the lure of business-as-usual can be strong,” said Ryan. “The slowest and hardest part of putting a project together is encouraging the various participants to dedicate sufficient time and resources to implement the changes.”

The platform is currently working to introduce its product-to-plate solution to the markets of major livestock producers worldwide, including the European Union, Brazil, Canada, Argentina and Uruguay.

“The end goal is to reduce farm paperwork so farmers can manage farms and not forms and so they can also provide the evidence that helps them earn premium prices for the food they produce,” said Ryan.

“In short, the goal is to ensure farmers can earn more money for the same work.”